This gap will disappear once the website is published 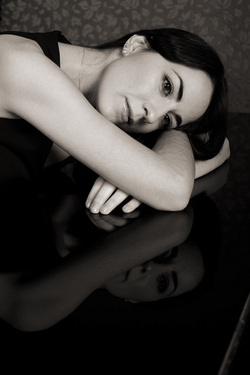 Maite Aguirre is a Spanish concert pianist and conductor based in London. She is the Director, Head of Piano and member of the Piano faculty of the Academia de Musica, piano teacher at St Paul's Cathedral School and conductor of BLP Choir . She also runs her own practice, the South London Piano Studio. Her first solo CD with music of Granados has received unanimous praise.

Born in Bilbao, Maite was introduced to music whilst being a chorister at the Opera House in Bilbao. Later on, Maite began playing the piano, and continued her education in Barcelona, where she studied her BMus (Hons) Piano and Postgraduate with Vladislav Bronevetzky, former assistant of Elisso Virsaladze in Moscow, at the ESMuC. She finished her degree with Distinction, and moved to London to complete the Master of Performance in Piano Accompaniment under the tutelage of Pamela Lidiard, Graham Johnson and Iain Burnside at the Guildhall School of Music and Drama, where she also started working on her conducting technique with Sian Edwards. Graduating again with Distinction, she carried on her musical development undertaking the Advanced Certificate in Repetiteur and Opera Conducting also at the Guildhall School, where she had the opportunity to continue working with Sian Edwards, but also Peter Robinson, Michael Lloyd and Alex Ingram. Parallel to her official study programme at these two Music Schools, 2012-2013 Maite was the Lucille Graham Fellow of the Royal Academy of Music. Maite is currently a doctoral candidate at the Guildhall School of Music under the supervision of Prof Sir Barry Ife and Ronan O'Hora.

As a pianist Maite has received advice from Eldar Nebolsin and Christian Zacharias, and has toured all over Spain, in France, Germany and Norway, and has played in London venues including King’s Place, Wigmore Hall, St John’s Smith Square and the Barbican Hall; she has also recorded both for TV and radio: BTV, TV3, CR, RNE and BBC Radio3.

She is well sought after as a chamber musician and has an extensive repertoire that encompasses all genres of the music literature. As an accompanist, she has played in masterclasses and private lessons for acclaimed international voices such as Denis O'Neill, Angela Gheorghiu, Dame Kiri Te Kanawa, Dame Josephine Barstow, Sir John Tomlinson, Sarah Walker, Yvonne Kenny, Brigitte Fassbaender, Susan Bullock, Sally Burgess and Marilyn Rees, and won the Tracey Chadwell Memorial Award for the best accompanist (2009) adjudicated by Roger Vignoles. Other prizes include “Ravel-Granados” (2002); three first prizes at the German Jugend Musiziert 2001, 2002 and 2003; Distinct Contemporary Music Prize D. Chrysler; first prize in the chamber music competition “Sant Joan de Vilatorrada” (2005); and the Masterclass prize from Wolfram Rieger (2007).

During her career, Maite has been gratefully supported with several Scholarships and awards: Beca de la Diputación de Bizkaia, Worshipful Company of Clockmakers, Pam Littman Award and the Leverhulme Trust. She received a full scholarship to attend the 2011 Conducting Masterclass led by Achim Holub in Graz.

As a conductor she has premiered several works by Francisco Coll, protegé of Thomas Adès as well as conducting the UK premiere of Contra-xions by Spanish composer Feliu Gasull (Composition Professor at ESMuC in Barcelona) in April 2011. Other engagements have included City of London Music Festival, conducting contemporary ballet at The Place for the London Contemporary Dance School and Voiceworks at Wigmore Hall (2010). Maite has also worked with Kammerphilarmonie Graz,(2011 and 2012). She is the conductor of  BLP Choir, winners of the Legal Harmony 2015 Competition, and is a guest conductor of the Iberian Latin American Music Society. Her first experience as an operatic MD was La Serva Padrona, where she worked with Alessandro Corbelli. She has also assisted in operas including Iolanta (Tchaikovsky) and Rita (Donizetti). Maite appeared at the Purcell Room in May 2012 with the Latin Collective, conducting different Latin American music, as well as giving the world premiere of Cazerolazo Concerto by Dr Ricardo Lorenz (Associate Professor of Michigan State University). Aguirre is a scholar of the Georg Solti Accademia and is featured in the BBC documentary on Georg Solti, Maestro or Mephisto. She has also worked jointly with the BBC Symphony Orchestra as Chorus Master and has conducted amongst others, the Milton Keynes Orchestra, the British Spanish Chamber Ensemble, and the Orpheus Sinfonia.

I owe thanks to these organisations for the support given during my studies and my career.